Honestly, I received some new items from a few of my generous sponsors, through trial and error, tossed an outfit together and decided to blog it for all of you to see. This one might be random, but I assure you there will be so much more to come! 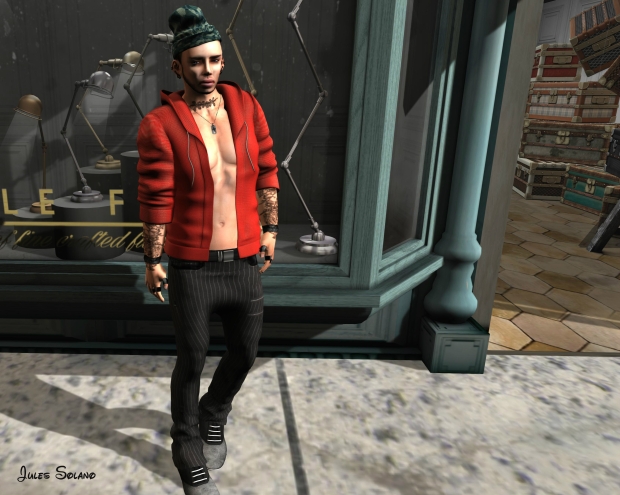 Lots to cover so let’s just get to it!

Fi*Fridays is all new for another week as of this past Friday (obviously).

Most of the place is filled up with fashions for the ladies, but if you keep an eye out, there’s some good pickings for the guys. Make sure to stop over at ::Fe Style:: where you can find a new group of 3 quarter-length sleeve shirts. Each one has a different pattern so you can buy them all and switch it up! 55L each!

The Mens Dept. opened up on the 5th and will last for the month. I’ve already been and spent more lindens than I anticipated!

SwaggedOut’s sponsor Sleepy Bozer has a sister store represented at the event, Valley Parks. There you will find the tattoo I’m sporting. This one is in color, but the black version can be found at the mainstore. Plus, I came across this new necklace from Pekka and the parka from Villena while I was there. This parka is pretty badass. As you can see, I’ve paired it with a shirt, but it comes separately in different colors. Both female and male sizes in one single pack.

Last, but not least, is Depraved Nation’s Boys of Summer event. It opens tomorrow and I am HELLA excited.

I’ve been receiving tons and tons of items from various designers that will be featured here on the blog at some point during the next month. Not sure what the setup will be yet, but you’ll find the XIAJ sneakers and jeans from GLO*Mart somewhere on the premises!

Okay, did I forget anything? Whew! Get to shopping!